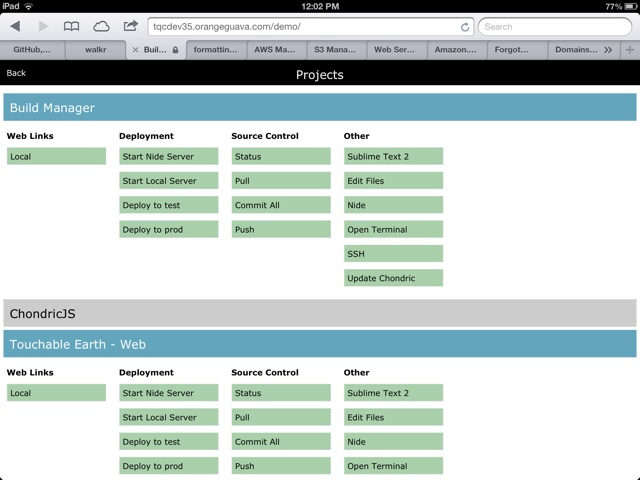 This is part 2 of my series on developing with only an iPad. Part 1

Before actually writing code with an iPad, the first step is to improve my normal system a bit - I usually have about twenty terminal windows open, some for the git command line and build scripts, some for running and restarting development servers. Clearly that won’t be all that practical with only a single window available.

In most cases there aren’t that many commands I need to run - git pull/commit/push and a server start command covers at least 90% of it.

I have set up a simple node.js web app to expose those most common operations as single clicks.

The app isn’t particularly elegant, and will need quite a bit done before I release it publicly, but it works and provides a good place to add new tools as I discover the need for them.

An interesting side effect of the need to control a remote server from the iPad is that I can also control my desktop - useful for those times when three monitors just isn’t quite enough.

After a fairly minimal amount of testing on the desktop, I install the app on an EC2 micro instance. It will need some changes to get it working effectively, but I’m out of desktop development time and at least I’m not starting completely from scratch.