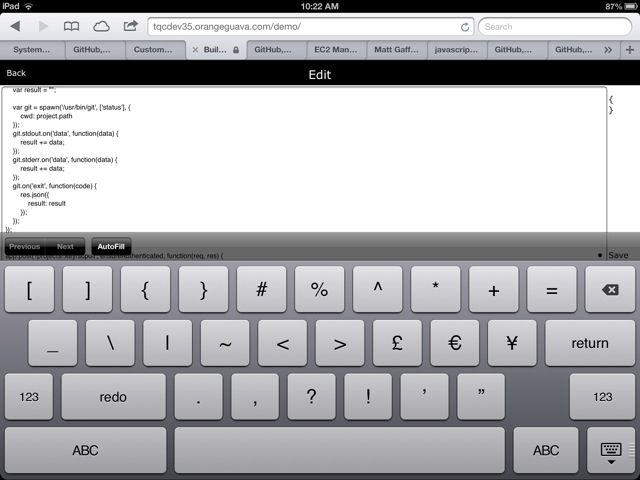 This is part 5 of my series on developing with only an iPad. Part 1

Writing javascript with the on screen keyboard actually isn’t too bad. Braces are a little hard to get to, but since most of the time you only need them at the start and end of a function, it doesn’t interrupt the flow too much. At first I was typing a lot of apostrophes where I needed commas due to the way the comma key moves around when switching keyboards, but that didn’t take too long to get used to.

Html on the other hand is very annoying to write - it feels like every other character is on the second symbol page, and you can’t get any sort of flow at all.

A couple of custom keys may fix that, which is the next improvement I’ll be making to the editor. However, I suspect that the verbosity of html is also a big part of it. I’m not generally a big fan of template engines like Jade, but losing the angle brackets entirely could be a significant improvement in this scenario.

Editing CSS is somewhere in between. The main issue there is actually that I have a tendency to write long and messy stylesheets and rely on web inspector to tell me which line needs changing - probably not the best way to do things anyway.

The only real issue I’m running into (aside from the aforementioned angle brackets) is the cursor positioning - precisely positioning the cursor is quite hard. Adding some arrow keys to the editor would help, though it may also be possible to improve the mapping of touch position to cursor position - the default setup is clearly optimized for selecting plain text.